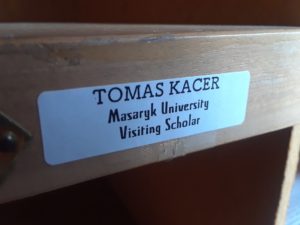 The best thing about going to the United States as a research affiliate is that you have time for research only and don’t have to deal with students. Well – it’s not true. I may have got plenty of time to carry out research and to spend with my family, but at the same time I’m missing teaching and contact with students at all levels. Let me give you my perspective of where I am, what I’m doing there and how things work there.

I’m at the Department of English at the University of Texas at Austin as a Fulbright researcher. My research project is in the field of American drama and theatre, just like it was at home. The difference is that there is the world’s best research facility in my field here on campus – the Harry Ransom Humanities Research Center. You can actually see it from window of my building.  That’s how close it is.

I sometimes joke about it and say that I chose Austin because of Harry Ransom (everybody understands this reason as a given) and then made a circle around it on the map and found Calhoun building, which happens to be a home to the Department of English. In reality, I sent an email to the Department and they replied within a few minutes that yes, they were willing to host me. I couldn’t be happier, because the Department has a great reputation.

I focus on whatever they have on American drama and theatre before 1917. There are several hundred boxes of this, so I need to economize and be very picky.

Harry Ransom stores millions of artefacts from my field and period and has a very helpful staff. You can check their website here. Besides permanent collections, there are exhibitions and talks. We get Pulitzer Prize winners (one of them, the playwright Lynn Nottage is giving a talk today – but I must finish this letter first!) and everyone is hoping to see the latest Nobel Prize laureate, Kazuo Ishiguro, whose archival collection has been at Harry Ransom for some time now.

I focus on whatever they have on American drama and theatre before 1917. There are several hundred boxes of this, so I need to economize and be very picky. After all, it takes about a whole day of work to go through one box and I need to be done before Christmas – only to jump to boxes storing material of the following period. I’m interested specifically in a transfer of avant-garde dramatic and theatrical practices from continental Europe to the United States (via Great Britain, of course) and see, how the word “avant-garde” or “Modernist” disappeared from practitioners’ vocabulary. For this reason, I will be going through playwrights’ drafts and notebooks, critics’ journals and correspondence and practitioners’ sketchbooks.

Each morning I leave my house and then I need to choose where to go. I have my own office at the Department, but it is hopelessly empty. Good for work, bad for socializing. On the other hand, there is a coffee room around the corner from my office with free coffee and snacks in the morning. Good for socializing, bad for work.

Or, I can go to Harry Ransom. Or, I can go to any of the three libraries that have collections of my stuff: materials in British and American literature, drama and theater history.

There is the Perry-Castaneda central library where halves of the third and sixth floors are humanities collections. This may seem not a lot, but as they say, “Everything is bigger in Texas,” and this applies to library collections too. To give you a perspective: Imagine a floor of the MU Faculty of Arts’ Central Library. All the stacks there make for a letter in the alphabet. Now, there are bulks of stacks lettered A-N on each floor of the central library here. You definitely need a map on your first two or three visits. Then, there are the Fine Arts library (this one is comparable to the Faculty of Arts), and the library of American History, which has a lot more than just American history books. It is overwhelming.

The Department here (besides being bigger) reminds me a lot of our Department at home. Professors are friendly (and helpful and nice – just like in Brno) and the staff are really helpful, too. You can study similar subjects here as in Brno in the fields of British (and partly, American) literature and culture. However, there is a huge difference: they don’t have linguistics here. Nor do they teach methodology or translation. All that needs to be studied at other departments. First, this was really surprising for me: there are over sixty faculty at the English department but only one of them is a linguistics guy. And what’s more: he is German. On the other hand, you have five professors in Shakespeare and a lot of actual writers and poets.

The lectures are open to everyone and there are a lot of students who major in other subjects that decide to take an undergraduate course in the English department.

I have gone to see a few classes, because teachers and students are happy to have visitors. I was surprised to see many classes taught as lectures. I understood why when I came to an auditorium and found around 200 students there. As usual, the lectures are open to everyone and there are a lot of students who major in other subjects that decide to take an undergraduate course in the English department. I wish we had more of this mingling at home!

On graduate levels, seminars are the standard. As is common in the United States, most classes are 90 minutes long and take place twice a week. The class experience is what one expects from an American university: a lot of engaged discussion between enthusiastic teachers and opinionated students. Yet, technology is creeping in and I have seen a lot of PowerPoint presentations in seminars, too.

The university campus is a city within a city. With more than 40,000 students, it takes up a whole neighborhood. You can walk from one end to the other in about 20 minutes, so most of students and professors use bikes. It’s a bit hot for that, but it rarely rains and it never gets really cold. You can also ride public transportation, which is free for UT students. These are great perks to a student life! Despite being a bike commuter in Brno, I prefer to walk here. After all, there is air-conditioning in every building and I don’t want to risk catching a cold. There is nothing more annoying than having a cold when it’s 30 degrees out there!

The university campus is a city within a city. With more than 40,000 students, it takes up a whole neighborhood.

I live in a neighborhood that is called Hyde Park. It’s a great place for our two kids to grow up. It’s a typical old-style American suburb with one-family houses with small front and back yards. Our street is full of graduate students, current professors or retired professors. People play with kids in the streets, walk their dogs, charge their cars (yes, Texas is going electric – it’s the fastest growing industry in the world’s eighth economy), recycle, make compost and jog around. Take Bayerova street in Brno and spread it out into a neighborhood with one-floor houses – and you’ve got the idea. There are so many hipsters everywhere you can’t see chalkboard menus in cafés through glowing apples on their laptops.

I wanted to say so many things about Texas and how fast it is changing and how none of the clichés are true anymore (well, “Everything is bigger in Texas,” that one holds). But I’ve been already storing them for my course syllabus in Texas history and culture. I guess you need to take that course if you want to see some slides from my trips to the Gulf of Mexico, the Big Bend national park and any of the twelve water holes in Austin. Which reminds me: I need to run now to make it for some outdoor swimming to be back on time for the Pulitzer playwright talk!

Mgr. Tomáš Kačer, PhD. is an assistant professor at the Department of English and American Studies and the Department of Theatre Studies. His academic interests include the history of British drama UK, contemporary US drama and also the theory of theatre and drama (especially Czech structuralism, semiotics and narratology). He is also a translator of novels and plays.
All photographs accompanying this article are his own.

by Mariia Minaeva There were two things I had heard about the
By Anna Mária Pisoňová The United States has never been on my
By Patrícia Iliašová   At the end of August 2018, Brno welcomed
By Tereza Walsbergerová   Dear reader, I thought that since this is
By Petra Polanič The political climate is eerie. You might wish to

You can find out more about which cookies we are using or switch them off in settings.

This website uses cookies so that we can provide you with the best user experience possible. Cookie information is stored in your browser and performs functions such as recognising you when you return to our website and helping our team to understand which sections of the website you find most interesting and useful.

Strictly Necessary Cookie should be enabled at all times so that we can save your preferences for cookie settings.

If you disable this cookie, we will not be able to save your preferences. This means that every time you visit this website you will need to enable or disable cookies again.